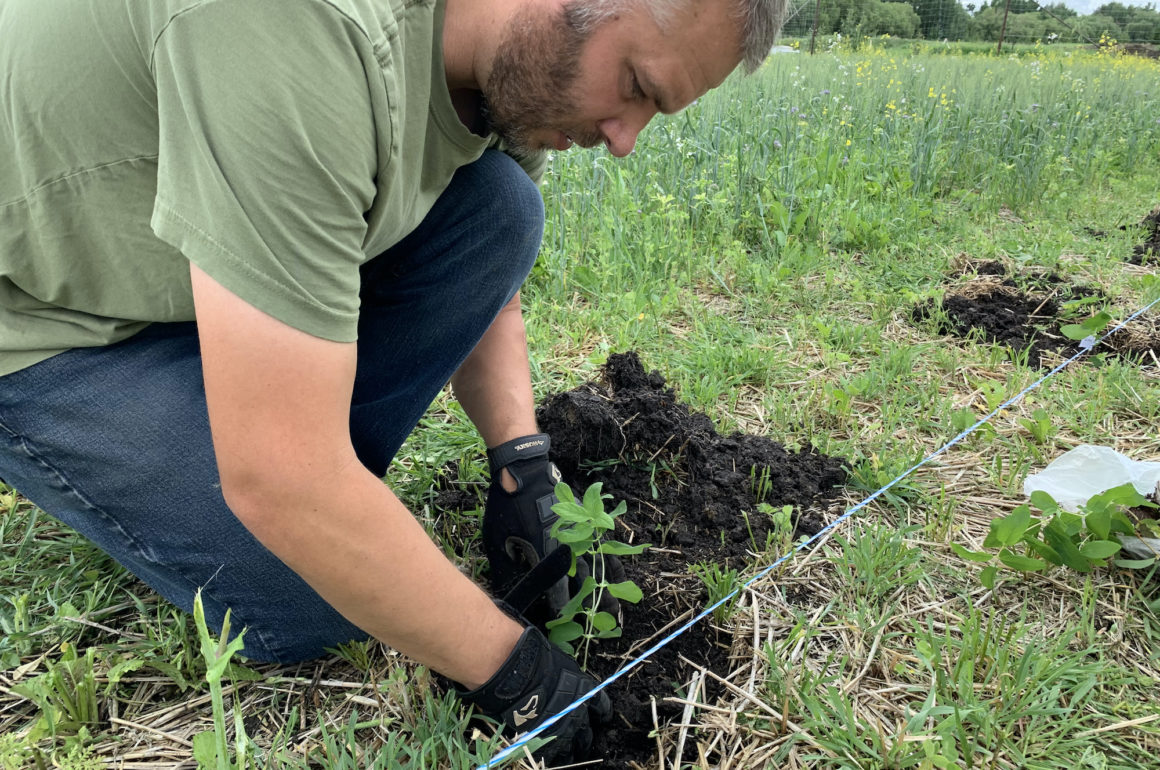 It was a pretty exciting week here as we finally got to plant our haskap section of the orchard! Our 112 little baby haskap plants actually arrived in a small cardboard box back on June 15 – but they had come straight from the nursery and had to be hardened off first. (This is a process of gradually exposing them to the outside elements of wind and sun over a period of about 7-10 days.)

However, as it happened, Alberta entered a recorded breaking heatwave just about the time these little haskaps were hardened off and ready to get out to the orchard. I decided not to plant them yet, and just keep them protected (and shaded) around the house until the heatwave passed. This wasn’t ideal, but I’m sure it was better than setting them out to bake in the sun! It wasn’t until July 5 (20 days after they arrived) that the weather cooled off enough that I felt it was ok to plant them. It was a bit overcast with a high of only about 20° – so that was perfect for planting! The rest of the week was forecast to be between 25° and 30° (not great for little plants) but I didn’t want to keep them in their little plastic bags any longer and so we planted!

The first thing I did was to mow a strip through our covercrop. Our covercrop (of barley, canola, radish, turnip, peas, clover, phacelia and several other varieties) was growing really well in that area of the orchard and was super thick! But I needed to be able to run a string line to keep the rows straight, so a couple passes with the mower cleared a nice path! With that done, I strung my line and tape measurer and my son Ben & I planted the little haskap plugs in rows of 16 plants spaced 5 ft apart. As we planted, my daughter Allison watered them in good!

There were 16 plants of each of the seven varieties I had ordered – Boreal Blizzard, Boreal Beast, Boreal Beauty, Aurora, Honeybee, Indigo Gem, and Indigo Treat. (I had also ordered Borealis and Tundra, but they were unavailable at that time – I’ll see if I can get them later this fall.) Because of the extended time before I could plant them, a handful of the plants ended up not looking well and I think I’ll lose some of them. The record-breaking heatwave is over, but the hot weather continues and some plants have had some wilty moments.

I’ve had to water them daily so far – I’m hoping to get some cooler cloudy days soon and can start reducing the amount of water they need. I also have a pile of mulch I need to apply – but so far I haven’t had a chance to do that! I think that’ll be Monday’s job!

If I could do it again, I think I would order for fall delivery and planting – mid-summer is just too hard on the plants. But I think the vast majority of plants will come through and we’ll be eating haskap berries before we know it!